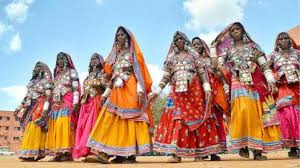 LAMBADA TRIBE – THE VIBRANT GYPSIES OF THE DECCAN

Lambada tribe – If you see a stunning village belle decked up in a colorful ghagra with her hair uniquely braided, you can’t help but fall for her striking looks and fanciful attire. Splashing colors on the dull terrain of Deccan is the tribe ‘Lambada’, even called ‘Banjara’. As forest wanderers they traveled centuries ago from the sand-land of Rajasthan. Comfortably settled in and around the hills of Andhra Pradesh, Lambadas have a rich history, and that shows in their attires and stories. Since they have branched out of from the Rajputs of Mewar, this tribe was actually the warriors. In Maharashtra and Gujarat they are called ‘Vanjaras’.

Lambadas usually worship Hindu gods like Balaji, Jagadamba Devi or Thulja Bhavani, Ganesh, Mahadev, Khandoba/Kanhoba and Hanuman. However, their main deities are Sati and Saint Sevalal. Born to Bhima Naik and Dharmini Bai, Sevalal was a cattle merchant by profession. According to popular belief he had powers to cure any kind of disease. He was also a man of exemplary truthfulness, a great musician, a courageous warrior, a rationalist who fought against superstition and was a devotee of Goddess Jagadamba. Lambadas make sacrifices too. The sacrifice of a ram is their way to communicate with their ancestors. The ram is thus a messenger ram. This ritual is symbolic and carries importance.

Living in a joint family is the usual norm in Lambadas. The joint family only plays the dominant role in choosing the mates. Marriage by negotiations between the groom and bride side is the only accepted way of performing marriages, and sometimes marriage by service is also practiced. The married women wear ivory bangles above her elbows, called ‘Balia’.Fascinating thing about the Lambadas marriage is that after the marriage is fixed, the groom has to live with the bride’s family for a month or so and prove his mettle. The burden of adjustment is not on the woman but on the man. The system of dowry also doesn’t exist in Lambadas. In fact, the groom has to gift the bride’s family as he is taking the girl who is considered more valuable.

A Lambada woman weaves her charm around you with her plated hair locks, adorned with striking silver jewellery. The white metal also bejewels her veil, called tukri. Extensive mirror work can also be found in the tukris. It’s being said that the mirrors were used mostly in the ladies’ attires for protection. Like their Rajasthanis counterparts, Lambada women wear white bangles, called bandiya on their arms. Silver rings, chains and coins are predominately used in the jewellery. And if you want a dash of their mesmerizing world, you can buy from their wide range of jewellery, apparel, figurines and artifacts at Tribal Mantra.

Lambadas speak Gor Boli; also called Lambadi. This dialect belongs to the Indo-Aryan group of languages. Gor Boli is quite similar to Gujarati but is infused with Sanskrit words. Most of the Lambadas today are bilingual or multilingual as they have adopted their surroundings. If the Telangana Lambadas are fluent in Telugu, Karnataka and Maharashtra-based Lambadas speak in the local languages of the state respectively.

Lambadas practice arts like rangoli making, textile embroidery, tattooing and painting. Lambadas are good with mirror work which they called ‘Lepo’. The women wear the dupattas with lepo work.

Lambadas celebrate all kinds of Hindu festivals, but the most important of all is the Teej which they celebrate during Shravana (the month of August). In this festival, unmarried Lambada girls pray for a good groom. They sow seeds in bamboo bowls and water it for nine days. If the sprouts in these bowls grow thick and high, it’s considered to be as a good omen. Teej is incomplete without dance. The seedling-baskets are kept in the middle and girls sing and dance around it.