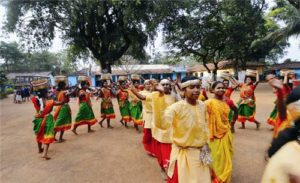 A Tribe of Sorcerers

Do you want to know about the four Baiga magicians – baiga tribe? They were so powerful that can even stop earthquakes “Magic is there in the blood, quite literally!” –  a Baiga tribal boy was telling us about the magicians of his clan, and we were glued to his narrative.

He tells us there are four great Baiga magicians as per their legends. They were called Daugan, Nindhan, Danantar and Madhakwar.

The leading black magicians of Baigas, as per the legend, are ‘Kana’ Gond and ‘Langdi’ dhobin. Yes, they drank from the black blood of the left shoulder.

Baigashave three grades of magicians: The top grade, the most prominent ones are ‘Dewars’. What makes a magician, a Dewar?

A Dewar can stop earthquakes, cause rains, and can even tame the tigers. A Dewar can only perform the Baiga agricultural rites of Bidri.

The second order of magicians is formed by Gunias. They havea good knowledge to cure any kind of human and animal diseases.

Jana Pandas are the lowest grade of magicians and are very common. They know about good and bad omens and interpret dreams.

One will be shocked to know that some of the Baiga Jan Pandas and Gunias are women, and there is no taboo attached to it. But women have not been accepted as the Dewars by the Baiga community.  It’s said that they hardly qualify. That is also the reason why 90 percent of Baiga magicians are men.

There are three versions of the origin of the Baiga tribal community. One school of thought suggests that they actually emerged from the ancient stock of the Santhal tribe. The second says that they emerged independently, but their ancestors had been the close kin of the Gonds. The third does not accept Baigas’ proximity either to the Santhals or the Gonds, but calls them an independent tribe (Triloki Nath Madan) that emerged from the jungles of present day Rewa district of MP state in ancient times. It seems Baiga families have recorded their history from ten to thirty thousand years ago in the rock shelters of Central Narmada Valley region of Hoshangabad and its adjoining districts. It seems that very dense forests in the Central Narmada Valley region consisting of ten modern districts of India’s central province (MP), viz. Narsinghpur, Harda, Hoshangabad, Betul, Raisen, Sehore, Bhopal, Jabalpur and some parts of Sagar and Damoh were the original habitat of the Baigas. Baigas roamed around and lived in these forests freely. Besides, some of the Baigas, Korkus and Nahals lived in the forests of Tapti River Valley in the districts of Khandwa and Burhanpur. About 85% of the total geographical area in these districts had dense canopy forests. Baigas lived in these forests and carried out shifting, slash and burn cultivation for thousands of years without any influence or competition from other Indian residents or habitats. The Hindu Epics Ramayana and Mahabharta make many references to the uncivilized and naked, forest-dwelling, tree-burning, non-Devas or demons of Central India who practiced black magic and disturbed the Hindu sadhus, hermits and saints by breaking their meditation.

It was during the five Gond Kingdoms that many Baigas were appointed as royal priests, shamans and physicians. Baigas served their Gond kings very efficiently and effectively. Royal Baigas of Garha and Mandla kingdom, as well the Haihaya kingdom of Ratanpur became legendary figures.

Baigas believe that they are the chosen few who have been hand-crafted by the God himself. No wonder, they consider themselves the kings and rulers of the entire earth. They called God, the Bhagwan, the Bada Dev (big deity).

Most Baigas can talk in Hindi. Depending on their area of their and some of them also know a few local languages like Gondi or Marathi depending on the region they live in.