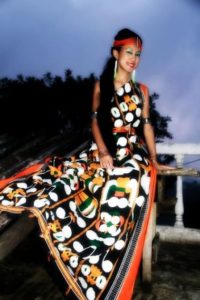 The Stylish of the Naga Tribes

Their fashion has changed over the time, but they have not left the ethnicity. Chakhesangs stay mostly in and around Khezakeno. A place situated in the Phek district of Nagaland, around 60 km away from the capital Kohima. The village of Khezakeno is legendary because this is the place from where all the Naga tribes are said to be originated. There are legends galore of Khezakeno.

Chakhesangs are the former Eastern Angami tribes, who got separated from the Angami Naga tribe, and are now recognized as a separate tribe. There is nothing much known about the history of the tribe, it’s all in the lore and legends.

Chakhesangs are fond of music and dancing. They participate in yearly festivals and promote their culture while make merry. Women and men both are fond of fashion.

This tribe is very particular about their traditional attire. Chi Pi Khwu or shawl they wear it as the definitive symbol of honor and privilege. The symbols on these shawls carry a quirky take on natural objects. Though modern Naga women are wearing these shawls as an ultimate style statement, giving them the modern twist, these shawls were actually worn by the honourable people of the tribe. Just anybody can’t have the access to these outfits. This is actually the shawl of merit.